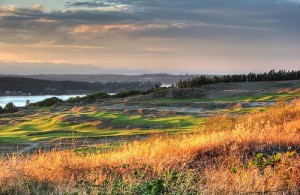 Chambers Bay, located about an hour south of Seattle in University Place Washington is one of those courses that needs to be on your “must play” list.

Designed by Robert Trent Jones Jr. and opened in 2007, it has received numerous accolades for its design, including “Top new course you can play”, “Course of the year” and “Best new course” by US golf magazines. Perhaps best of all though, is the selection of Chambers Bay to host the 2010 US Amateur Championship and in 2015 to host the US Open.

Pierce County deserves a lot of praise for developing and maintaining a vision for the development. The site of a former gravel pit was reclaimed and renovated to produce not only a fabulour golf course, but also a recreational amenity for the community. Walking trails co-exist with cart paths and maintenance roads throughout the course and the course was designed and developed to meet the Audobon Society Silver level. Interestingly, it is a “walking only” course unlike most new developments, and there is nary a house to be seen on the course. It is a very compact design, with only a few long walks between holes, but the holes remain separated and it often feels as though you are on the course by yourself.

The view from the parking lot and clubhouse are spectacular, set high above the course. It is awe-inspiring with the Olympic Mountains in the background and Puget Sound nesting up against the property. You can see every hole. A bus takes you down to the starter area and range.

Trent Jones was mandated to develop a links-style course on the ocean side property. It looks and feels much like celebrated Bandon Dunes, but is on Puget Sound rather than open ocean. The fairways are lined by sand and gravel dunes, covered in fescue and other natural ground cover, creating the separation. The dunes are also ideal viewing locations, and were designed with flat tops so that stands can be placed for events.

The fairways are just that – fair – with no artificial mounding and generally flat lies. What leads to the difficulty are the bunkers and large waste areas that line many of the fairways and surround some greens. The greens are generally sloping and the breaks are subtle, but they are hard and fast. Apparently Trent Jones was told to ensure there was a slight slope to many of the tee boxes, to provide a more realistic “old country” feel to the course.

One of the more interesting features was the use of a single grass from tee to green. On nearly all of the greens, the transition from fairway to green was nearly invisible, with the length of the grass as you approach the green just getting shorter. This makes for exellent bump and run conditions, and with the hard, fast greens was usually the preferred approach. On a few holes, there was no distinct tee box, particularly from the mid to forward tees, and the markers appeared to just be placed on the fairway.

I thought the most interesting hole was # 12. This short par 4 called the Narrows, ranges from 219 to 304 yards, so conceivably is reachable if you are in the right tee area. It is tempting. The fairway is only 30 yards wide, and is lined both sides by dunes. A large bunker guards the front. What will prove interesting on the hole is the green which has some of the steepest slopes I’ve ever seen. The website calls it “bold”, but I would suggest it is extreme. For professional events, they will play from a tee which will require a draw to the green, but the distance will be greater and there is no margin for error on the narrow fairway.

Other great holes are #14 – long dogleg over a waste area on the right, but with bunkers right where you might want to place a good tee shot. Hole #9, Olympus, is a medium length par 3, that drops 120′ to a green well guarded on the right.

One of my companions, a well-traveled golfer, compared the course very favourably to any he had played in Scotland – “As much fun as you could ever have playing golf”.

More information is available at www.chambersbaygolf.com