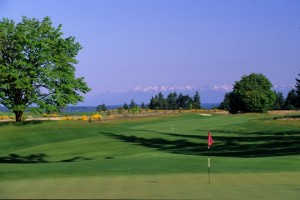 The Home Course in Dupont, Washington is one of those golf course stories that is an inspiration and a credit to the golf industry.

The site was first developed by the Hudson’s Bay Company in 1833 and Fort Nisqually was built to conduct trading with the Salish people in the region. The Fort site has been preserved and is adjacent to the first green of the course. In 1906, the site was obtained by the Dupont Company and a factory constructed to produce explosives with production continuing through the 1970’s. The site was then acquired by local forest company Weyerhaeuser as a site for future development. However, the production of toxic explosives over the 70 year period left the site unusable for housing development and Weyerhaeuser made the decision to remediate the site by constructing a golf course and hired Arizona golf architect Mike Asmundson to design the site. The site was constructed and maintained for several years, until further environmental testing could be done, and at that time, Weyerhaeuser sold the site to the Pacific Northwest Golf Association (of which BCGA members are part of) and the Washington State Golf Association in 2007. Over the next few years, both Associations will construct their headquarters at the site.

While the course itself is complete (pending a few adjustments) the site is still in development. Construction is underway on a clubhouse and other buildings and areas off the fairways and adjacent waste areas remain to be cleaned up. It presently has the feel of a series of 18 hole oases, set amidst a desert of sand and gravel and former ammunition bunkers.

Set on slightly rolling terrain, it’s a long course from the back tees at 7,385 yards with a rating of 75.7. From the men’s middle tees it’s a little easier at 6,587 yards and a rating of 71.6. The site was partially remediated by bringing in barges of sand and gravel (possibly from Chambers Bay, about 10 miles up Puget Sound) to the waterfront site which has provided great growing conditions for the property. Views of Mt Ranier to the east are present on almost all holes, with Puget Sound to the west.

The routing for the course is very good and the course is very walkable. It has the feel of Morgan Creek in Vancouver, but covers a larger area, with more area between fairways on a number of holes. However, housing is not a distraction and is not visible, except for two holes. I found the course very playable, with few blind tee shots. The difficulty on the course comes from the fast greens and the bunkering. Several greens have a lot of contour and swales that will pose the average golfer a challenge.

One issue I have is with the liberal use of out of bounds areas, even on holes that aren’t on the periphery of the property. With the sand and gravel areas lining many fairways, it’s not difficult to roll or bounce out of bounds with a slightly wayward tee shot. While out of bounds areas may have a place in competitions, for most casual play, lateral hazards make more sense in speeding up play. On many holes, it should be left open for golfers to play from the waste areas.

The course has also had an issue with complaints from some residents, forcing it to change its layout on two holes. While the housing was built after the course was constructed and is a generous distance from fairways, the threat of a lawsuit has required the course to change the layout and the playing of holes 2 and 3 of the Weyerhaeuser nine. It’s a shame, as the course design was fine. A giant net might have made more sense.
I particularly enjoyed two holes. Number 7 on the Dupont nine is a 375 yard (blue tees) par 4 which would ordinarily be routine. However a pond guarding the immediate front of the green and bunkers at the back make for an interesting decision on the accuracy of your irons, particularly with the hard and fast greens. Number 5 on the Weyerhaeuser nine is a pretty par 3, also with a pond nearly surrounding the green.

The Home Course will be co-hosting some of the early rounds of the US Open with Chambers Bay in 2015. Both share a similar look and feel, although the Home Course is more parkland style and Chambers Bay a links style. As the PNGA continues to develop the course and particularly the waste areas, it will prove both a challenging design as well as a visually interesting course.

When combined with Chambers Bay (about 15 minutes away), the Home Course makes for a great weekend combination for BC golfers. Combine two rounds with a ball game and some shopping and you’ve got an ideal weekend.

More information is available at www.thehomecourse.com/.