From Oppression to Opportunity: St. Eugene Golf Resort and Casino
By Bob Joseph 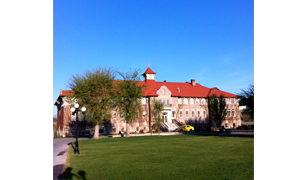 Built in 1910 as the first Indian “Industrial and Residential School” in western Canada, run by the Oblates of Mary Immaculate, the school instructed over 5000 children from the neighboring Nations. The school closed in 1970 and was basically left derelict for 20 years until the Ktunaxa Nation transformed it into this very successful and unique Golf Resort and Casino.

While I was playing my round of golf, I couldn’t help but reflect on how the Ktunaxa (pronounced “k-too-nah-ha”) have converted a former Indian Residential School into an icon of cultural opportunity – they took a symbol of oppression and turned it into a bounty of opportunity. The very building that was designed to assimilate Indians into the mainstream population by force, has become, decades later, a mainstream venue itself, and not by force but through ingenuity, pride and a desire to create an economic base for the Ktunaxa Nation.

I had a conversation with one of the employees about the Indian Residential School and they summed up the story more succinctly – “that’s where we lost our culture, so that’s where we are going to get it back.”

The response to the closure of this Indian Residential school, and others, and what to do with them has been varied. Some communities burned them down, others converted them to administration buildings, as did the Kamloops Indian Band, while still others like the Ktunaxa Nation, turned them into world class businesses featuring a hotel, golf course and casino.

This public course, designed by Les Furber, is laid out nicely along the St. Mary’s River behind the old Residential School and with spectacular views of Fisher Peak in the Rockies. I was impressed with the obvious attention paid to preserving wild areas and natural habitat surrounding the course. The course itself presents good shot values that force you to play strategically – challenging but not intimidating for a recreational golfer such as myself. If you play the red tees, you will cover 5398 yards to an impressive 7007 yards from the gold tees.

You will need some good clubs to play it, but fortunately for those of us who do not travel with their clubs, they will rent you a set of brand new Ping Clubs for $40. Seriously, these ones were so new that I was literally tearing the protective plastic off the G20 Drivers. Whoever said “equipment doesn’t help” is wrong – playing with these clubs made me want to throw rocks at my own clubs back home. Other pocketbook-friendly items include a weekday green fee of $45 and $17 for a cart rental. Great course, and not too hard on the pocketbook.

As I worked my way up the home stretch, with its challenges and traps, to the 18th, I realized that the Ktunaxa Nation was on its way metaphorically up the 18th too, and had overcome all kinds of oppressive challenges and traps and turned them all into opportunity, not just for a great business but for their long-term cultural survival. As they say in marketing, “it’s not the steak that sells, it’s the sizzle”. From my perspective, as someone who teaches cross cultural awareness, cultural survival is the sizzle in this story and the business opportunities are the steak.

Bob Joseph, founder and President of Indigenous Corporate Training Inc., has provided training on Indigenous and Aboriginal relations since 1994. His Canadian clients include all levels of government, Fortune 500 companies, financial institutions – including the World Bank – small and medium sized corporate enterprises, and Aboriginal Peoples. He has worked internationally for clients in the United States, Guatemala, Peru, and New Caledonia. In 2006, Bob facilitated a worldwide Indigenous Peoples’ Roundtable in Switzerland which included participants from the United Nations, Australia, New Zealand, North, Central and South America, Africa and the Philippines.